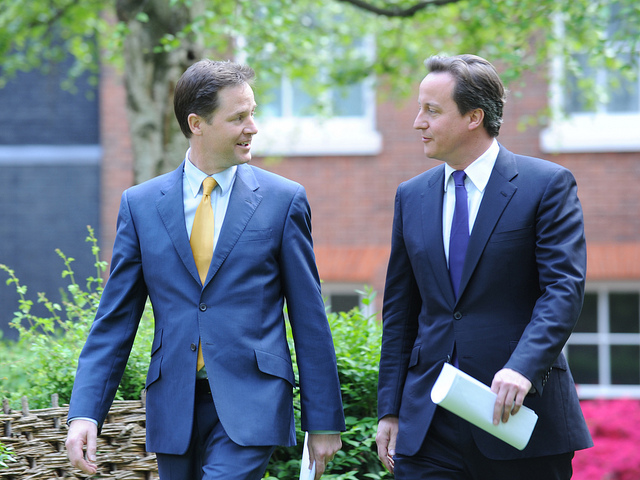 If, for one moment, we divorce the coalition government from its oft-controversial policies, and assess the government’s political stability, we unearth a startling discovery. British politics, having had a modus operandi of two-party majority politics for the better part of a century, is fully capable of dealing with the complexities and shift in political culture that is intrinsic within coalition politics.

It’s very easy now, after three years of coalition politics, to forget the challenges faced by the coalition as they entered government in the summer of 2010. Coalitions are never easy, and there are innumerable examples of them crumbling and fracturing political systems throughout the life of Western democracy, such as Weimar Germany’s troubled fledgling democracy and the more recent difficulties in Greece and Italy. The coalition’s survival, and its apparent strengthening as time goes on, is remarkable. The last time Britain was governed by a coalition was during the Second World War, and to stack the odds against the coalition further still, the junior partner, the Liberal Democrats, had not walked through the corridors of power since its predecessor’s (the Liberal Party) decline during the 1920s. The ideological chasm between the Conservatives and the Liberal Democrats is also, arguably, notably greater than that between the Liberal Democrats and Labour.

Against the backdrop of such daunting odds, the coalition remains and has persevered through challenging episodes of disunity which would even be discomforting in political systems where coalitions form part of the status quo. The Liberal Democrats, lacking any experience of Downing Street prior to 2010, are now able to boast a showcase of truly ministerial personalities such as Vince Cable and Danny Alexander. And while not all elements of the coalition agreement have been achieved, the central tenets upon which the coalition was founded remain at the heart of government policy, with little prospect of this changing in the future. The coalition’s stability must also be seen as a crowning testament to the truly world-class nature of this country’s civil service, without the quality of which the coalition’s survival would have been much more tenuous.

Ed Miliband’s recent foray into Labour’s funding by trade unions has brought the question of state funding of political parties to the foreground, once again highlighting the reluctance on the part of the political class to consider state funding, due to fear of public opinion.

While it is true to claim that money yields far lesser clout in British politics than the infamous multi-billion dollar campaigns of the United States, our current system of party funding is not ideal.

State funding of political parties is commonplace in countries like Sweden and Germany. The amount of funding that parties receive from the state is usually relative to the share of the popular vote which they receive in elections. State funding helps parties in these countries focus on reaching out to the electorate and crafting policy for the population, rather than spending time chasing around and attempting to entice and impress potential donors.

Some commentators strongly deplore the concept of state funding, as they believe that parties with public support should be capable of raising funds independently. As for the public’s apparent disdain for state funding, it is understandable. The idea that technically a small fraction of your taxes will be helping to fund a political party you do not support appears rather unfair and unpalatable.

Funds raised through membership fees and average member donations account for only a small fraction of the total expenditure of modern political parties. The shortfall is primarily made up for by wealthy donors such as Lord Salisbury and Lord Ashcroft, alongside funding from groups such as businesses and trade unions. While British politics is by no means corrupt, the current system of party funding could be said to be democratically disproportionate in some cases (the Conservatives have greater campaign funds than Labour, even during Labour’s time in government between 1997-2010), and to some degree exposes parties to minor influence from individuals and organisations with considerable sums of money.

Parties are a pivotal and essential component of functional democracy. They organise broad but similar standpoints into cohesive groupings with clear agendas. The modern political party is in a near-constant state of campaigning, participating in elections for public office and also supporting local movements and issues. They mobilise activists, hire advisors and political staff, craft comprehensive policy, and commission and conduct opinion polls and studies. These are all crucial aspects of any liberal democracy, but all come with a hefty price which must be paid for by someone.

To conclude, in the grand scheme of things, no other scheme rivals state funding in its ability to tackle, and depending upon the extent of the funding provided, eliminate the role of monetary influence in the political process. There really are only two options when it comes to party funding: either continue to have parties rely upon wealthy donors, or have the state support electorally-successful parties, thus establishing a neutral revenue stream and greater transparency in policy-making.

The Political Idealist
Notes from a Broken Society